Inquisition: Lord Inquisitor Arkhan of the Ordo Xenos is a radical-leaning Inquisitor assigned to explore the edges of Imperial space in order to assess the Xenos threat as well as looking for the esoteric and arcane technologies left behind during the Dark Age of Technology by ancient humans or by unknown xeno lifeforms. Lord Arkhan is accompanied into battle by his personal retinue of Scions aboard his Valkyrie Voidstalker as well as the various forces under his command.

Ship and Crew: Lord Arkhan’s ship Dawnhammer is a specially equipped black ship built for stealth and long range missions. Dawnhammer is equipped with mass drivers and missile batteries as well as drop pod and launch bays to deploy the various forces aboard the Dawnhammer. Honorary Inquisitor and Captain of the ship Ven Gethrik is responsible for ship-board affairs and maintains a personal retinue consisting of Astropath Feldarr the ship’s navigator, Techpriest Weaponsmith Gryx-0 master of ordinance and weaponry and 2 bodyguards charged with protecting the captain. Captain Gethrik’s retinue can call upon forces in orbit to strike enemy targets as well as coordinating reinforcements planetside. Dawnhammer’s crew numbers several thousand individuals gathered from all parts of the Imperium whether through bonds of service or as part of deals made with local forces. All members of the crew are sworn to secrecy and are dedicated to their master’s every command.

Militarum Tempestus: Scions requisitioned by the Lord Inquisitor to serve both as shipboard defence force as well as ground forces for the inquisitor. The Scions are led by Tempestor Prime Garith Rynn whose responsibilities include training new Scions, defending the ship and executing ground operations. Attached to the Scion Detachment comes Commissar Kline of Krieg charged with maintaining discipline in the Scions and the ship’s crew. Each squad of Scions has been assigned Taurox Primes which are deployed from orbit by means of Valkyrie Sky Talons. The grav clamps found on the underside of the Tauroxes also enables them to execute boarding maneuvers and gives the Scions flexibility in how they’re deployed.

Adeptus Mechanicus: The Mechanicus presence aboard Dawnhammer are led by Techpriest Dominus-Explorator Izmirian, a Requisitioner hailing from the Forgeworld of Myrmidia XIII. Izmirian has been brought along to study alien physiology and technology. Izmirian has been known for his extreme curiosity and near-Xenarite interest in xenos technology. Izmirian’s personal Kataphron Breachers have also been brought to be used for boarding actions, shipboard defence, planetfall and lifting cargo. In addition to military forces, Izmirian controls hosts of Transmechanics, Enginseers, Lexmechanics, and servitors who tend to the needs of the Inquisitor and the ship. Forces from the small contingent of Skitarii can also be found on board, they’re primary roles are reconnaissance, data-harvesting and Imperial Knight support, they are led by Alpha Primus Telerik-6-4.

Deathwatch: Kill Team Ozan is led by Watch Captain Ozan of the White Scars chapter. The kill team specializes in surgical boarding operations as well as planetary strikes by means of drop pod. Each member of the kill team is loyal to the Lord Inquisitor although his extreme methods have led to some strain between the two parties. The kill team is comprised of members from vaunted chapters such as the Salamanders, Imperial Fists, Minotaurs and Howling Griffons.

Imperial Knight: Freeblade Marik Daavos is honor-bound to the Lord Inquisitor for saving his life moments before his Knight Crusader was torn apart by Tyranid bio-monstrosity. Although no-longer bound by his Knightly House Daavos considers himself a gentleman and adventurer without peer and takes his personal honor very seriously. However, Being bound to the Lord Inquisitor isn’t without its perks, Daavos is able to explore and see the Galaxy while fighting his hated enemy, the Necrons. Although Daavos maintains a small garrison of sacristans much of the Imperial Knight’s needs are tended to by Techpriest Izmirian and his retinue.

The Dawnhammer is currently located in the Segmentum Tempestus in search of worlds that lie outside of Imperial space that may hold long forgotten secrets. The Dawnhammer has engaged Necron and Tyranid forces in the Segmentum while engaging with Rogue Traders from the surrounding systems in search of artifacts of alien origin or from the dark and murky past of mankind. Lord Arkhan’s inquitorial superior in Segmentum Tempestus is High Lord Gyrass Linvala, High Lord Linvala and inquisitional sector command are headquartered at the space fortress Song of Veletis. 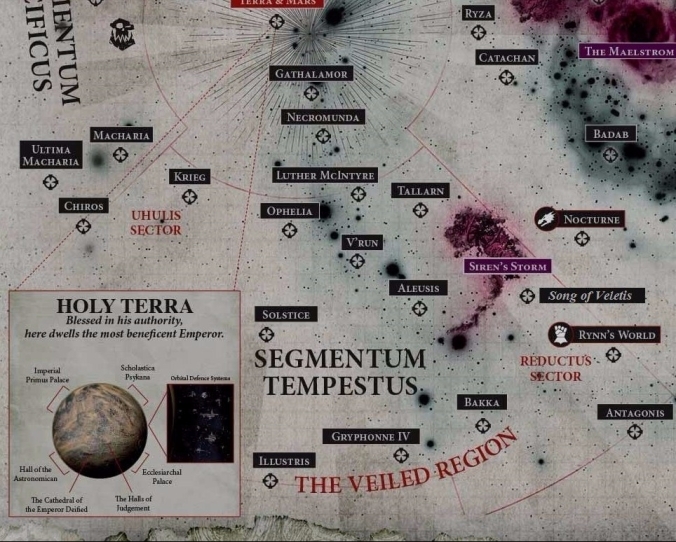 One thought on “Ordo Xenos: Lord Inquisitor Arkhan of the Ordo Xenos (Lore)”