The Khornate warband known as the Bloodbraided is led by the fearsome Bloodthirster Ul’Karash the Huntmaster. Although the daemonic warband that now wages bloody war in the name of Khorne was once entirely comprised of mortals, no one person knows from where they originate. One tale tells of a group of gangers, whose hair was braided with the bones of their enemies, from an unknown hive world that managed to topple their hive and offer the heads of all its denizens in honor of Khorne. Another story tells of a human tribe, known as the Tarakatai meaning “Tribe of the Woven Haired”, on a distant world that managed to gain the favor of Khorne by conquering the vast steppes of their home world. However, the shifting sands of time make it hard to discern what is reality and what is baseless fiction.

Regardless of their origins, the mortal warriors’ reward for their loyalty was to be elevated from their meager mortal forms into full fledged lesser daemons of the Blood God. The chieftain of the tribe was elevated to Daemon Princedom and gifted an axe crafted by the forges at the very foot of the Skull Throne. The axe, Dark Sire, when used to slay mortal heroes deemed worthy of respect by Khorne, will, instead of killing them, turn them into Bloodspawn, Chaos Spawn slaved to the will of the War God.

In addition to the dark apotheosis shared by the members of the tribe, Khorne allowed his Bloodthirster Ul’Karash to lead the tribe into battle as a physical totem of his favor. Ul’Karash, known as the Huntmaster of Khorne, perfectly embodies the predatory cycle. Wherever hunters stalk their unwitting prey, Ul’Karash, and through him Khorne, are empowered. 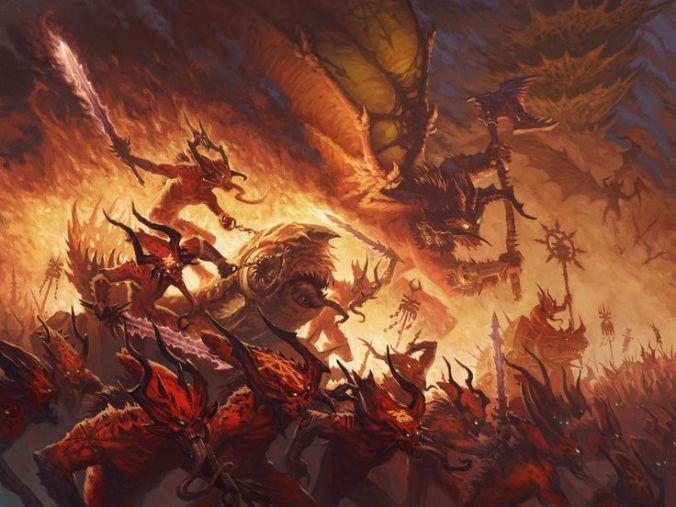 The Bloodbraided now reside within a pocket realm of Khorne’s domain, only governed over by the laws of strength and rage. When not called to hunt by Khorne, the members of the tribe battle one another to win the favor of Ul’Karash in his gladiatorial arenas. Each warrior slain in the arena find themselves resurrected by Khorne, bid to continue fighting for eternity as a twisted version of the Blood God’s paradise. When loosed upon the realms of mortals, Ul’Karash calls the tribe to a Blood Hunt. Savagely pursuing their quarry, the daemons of Khorne won’t rest until they’ve caught and mauled their prey. On a thousand worlds and across a thousand battlefields the Blood Hunt of Ul’Karash replicates the fearsome cycle of predator and prey.