The war on Samarra continues. The devastating first blow landed by the cult has laid the Imperial defenders low for the count. In this moment of weakness the other predators on Samarra are drawn to the blood. Like ravening wolves dueling over the carcass of a badly wounded dear, the Iron Claw Miners Guild squares off against the other factions seeking to bring Samarra into the fold. The misshapen and putrid cultists dedicated to the Plague God Nurgle now seek to finish what the brood brothers started. Emerging from their filth encrusted sewers the vile wretches of the Brotherhood of Rot emerge to subsume the entire planet in a wave of brackish pus. Waves of zombie-like Poxwalkers emerge from near the Refineries and move to strike the first blow against the broodkin in the myriad spires of the Manufactoria. Accompanying the shambling Poxwalkers strides Nurgle’s chosen Plague Marines and a menagerie of daemons and daemon-possessed machinery.

The followers of Nurgle lay veritable siege on to the hastily crafted Broodkin defense line. Having used cargo containers and manufactoria gangways to create a gateway of sorts, the Broodkin find themselves defending an outpost intended to be a launching point for raids, not a fortified bastion. Nevertheless the defense of the outpost is critical as it is in close proximity to landing pads used to ferry resources from the mines surrounding the Hive into areas where the Patriarch determines they are most useful.

As the Nurgle worshipers emerge from tunnels leading to the Underhive, they come under heavy fire from the Cult emplacements. Stolen rocket munitions blast Poxwalkers into chunks of flesh and rot while Myphitic Blight-Haulers unleash their toxin-ladened rounds into alien-tainted flesh. To any Imperial viewer such a sight might even bring a slight smile, watching the Chaos tainted and Alien fight to the death. Of course, that would be contingent on the winner of the fight not immediately turning their horrific weapons on the remaining human survivors. 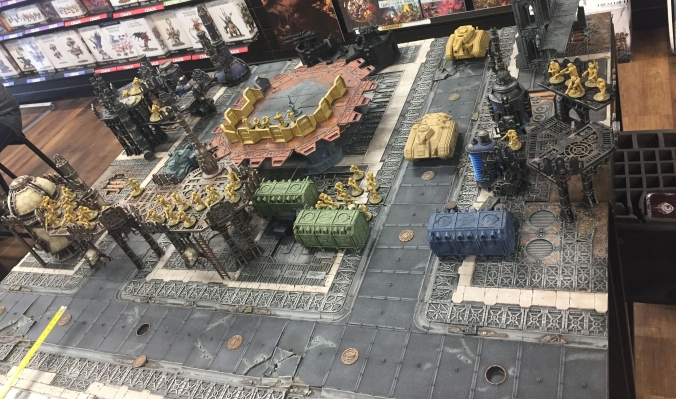 The implacable Plague Marines, accompanied by a Tocsin wielding champion, continue to walk directly towards their alien enemy, unleashing salvos from their plague-weapons as they come into range. The Guilders find themselves with aid unlooked for as a patrol of Acolytes in a Goliath emerges from behind the defense lines accompanied by a Cult Leman Russ. The brood brothers are not the only ones to receive reinforcement. Successfully managing to curry aid from their warp-spawned brethren, the maggotkin summon forth a swarm of Plague Drones. As the two forces near one another the din of battle echoes all throughout the Manufactoria. The grunts of Plague Marines as they shrug off an impressive amount of firepower, the sound of tank shells tearing apart daemonic flesh and the inhuman screams of the dying broodkin.

As the battle in the hive rages, fate has other things in store. Imperial battle-fleet Arvald transitions from warp space in orbit over the war-torn Samarra carrying fresh reinforcements. The two rival cults pull away from each other at the emergence of this new enemy, seeking to fortify their holdings before the Imperial onslaught begins. Anti-ship batteries emerge from the entrances of Cult-controlled mines all the while rot-shamans beseech Nurgle for aid. Where once the end seemed near, now only one thing is certain. The battle for Samarra has only just begun.