In the darkened depths of the Somberwold where the energies of the Realms of Life and Death weave together beneath the boughs of ancient trees there once lay a kingdom known as Trest. Protected by the impenetrable forest and guided by the good will of the God-King Sigmar, the people of Trest prospered and became a shining beacon of civilization in the dark heart of the woods. For generations the common folk and peasantry of Trest looked to their nobility for protection and support.

It was from these noble families that the royal family of Trest, the De’Arden, descended. The dynasty of De’Arden was known for producing some of the greatest kings the city had ever known, heroes such as Tancred, Chillfory IV “Goblinslayer” and Roland the Grim son of Charl. As great as the deeds of these men were they all pale in comparison to the legendary crusades of King Reynhard the Wise, the last living king of Trest, into the Realm of Death in opposition of the Great Necromancer. For in the heights of Trest’s successes during the reign of King Reynhard also lay its ultimate demise. During the early years of his reign, Reynhard’s wife Queen Valerie gave birth to their second son, a dark haired boy with skin as pale as snow. Queen Valeria named the child Lyran, in honor of her great grandfather. As the boy grew it became obvious that he was gifted with an uncanny charm and charisma that naturally made other want to follow him. In the natural leadership of the boy Reynhard saw a way to finally remove the encroaching undead threat and to solidify the place of Trest in the Realm of Life.

And so the boy grew, cherished by the people of Trest and by the royal family, into a young man of a overwhelming charisma and an endless curiosity. On the surface all seemed well, however, below the surface, a darkness grew in the boy, his magnetism and charm hid a terrible ambition and his curiosity left unchecked wandered in search of forbidden knowledge. Blinded by the adoration of the young man and his powers, the citizenry of Trest and their King allowed the seed of darkness to grow. Disguising his intentions as a mission of good will and healing the young man, accompanied by 5 of his closest friends, bid farewell to Trest and his family to embark on a quest of his own. Along with the prince traveled:

Early in his travels, Lyran and his band of allies searched for mentors to help them develop and hone their powers, deep into the woods they wandered until they came upon a tower of white marble, covered in vines and creepers and surrounded by dead trees. Although the keeper of the tower seemed to be docile old man, the young prince and his friends could feel the immense power stored within the old master.

Becoming students of the old man, each member of the group slowly became masters of their respective arts. The boy, now going by the name Dark Sun, became a fierce leader and skilled strategist. Galerion the Grim,  possessed of an instinctive understanding of the magic of Shyish quickly mastered the art of necromancy, raising legions of the undead. Morgon Bloodoath was gifted an axe imbued with the power to store the souls of those whose lives it took, granting their strength to that of the wielder. Unbeknownst to Morgon; however, the axe also slowly drained away the life of the wielder turning them into a member of the undead with every life taken. Kargan was granted the Veil of Silence, an artifact created by the wizard’s very own master, Arkhan the Black. The bearer of the Veil lost the ability to speak but emanated an aura of fear with which to cower their enemies. Ashurr was granted the red kiss of vampirism. In exchange for his soul and an insatiable hunger for blood he gained preternatural skill with the blade and learned the arts of hexmancy, crippling his opponents with curses before dealing the killing blow. Last of all was poor Valeric who was slain by the master when he attempted to turn his friends away from the path of darkness. From the ground the body of Valeric rose again, this time born anew by the power of Shyish. Borne atop his skeletal steed Valeric now leads his Black Knights in battle bent on slaying the living.

Unable to contain his ambition hidden any longer, the young prince rose up one night and slew the old master while completing a ritual in honor of Nagash, further empowering his natural abilities. It was here at this moment that the metamorphosis of the prince was completed. Transforming his mortal body into a that of a liche. From here the Dark Sun lead his Disciples out into the Realms in search of knowledge and plunder.

While the Disciples ventured into realms untold, the city of Trest endured and life continued as normal as memories of the young men began to fade. Only the King and the royal family awaited the return of the young prince.

The beginning of the end came on an auspicious morning. The first intruders were spotted at the crack of dawn and by mid-morning the gate and walls of the city were laid waste to by the remains of thousands of skeletal warriors. As the defenders of the city endured the endless waves of undead, an eerie mist descended upon the skeletal host, obscuring them from sight. As the mist descended upon the skeletal warriors, so too did clouds darken the skies over Trest, a thick and unmoving veil of the deepest gray. Suddenly, and without sound, the mist retreated deep into the forest. The defenders were shocked only to see their young prince where there had once been hordes of polished white bone. Shoulder to shoulder with Lyran were the 5 friends that he had ventured out with all those years before. Weaving a shimmering glamour, Kargan had made the Disciples appear to the villagers of Trest as they had before they left, untouched by the passage of years.

Seeing his son at the gates, King Reynhard ordered his men to quickly open the gate lest the skeletal warriors return. Blinded by emotion, King Reynhard allowed his son back into the city, even under these mysterious conditions. Striding through the gate, the prince embraced his aged father, easing the building tensions for but a moment. Just as the King turned to lead his son back to the keep, the prince drew a dagger of black soulglass and plunged it into his fathers back. In that horrific moment, the skeletal legions of Galerion reemerged from the forest at frightening speed and rushed the gates of the city. As the archers turned their bows upon the stranger, their throats are cut by the blades of Ashurr flying in over the wall. Quickly overwhelming the city guard, Galerion began to weave his most powerful spell. As the dark tones of his incantation grew, the souls of untold villagers are torn from their bodies and absorbed into the axe of Morgon. As the last inhabitants of the city have the life torn from their corpses, Morgon’s body shutters and grows, transforming him into a colossal skeletal executioner. In a final crescendo, Prince Lyran dawns his father’s crown and ascends the throne of Trest, rechristening it: Veil’s End.

From his throne at Veil’s End the Dark Sun seeks to grow his new kingdom of death. Galerion the Grim’s necromantic powers raise the bodies of the former inhabitants of Trest into an army of considerable size while servants from the surrounding villages are pressed into work by the fear instilled into them by Kargan, building loci for Shyishan energy while maintaining only the barest of crops to survive. Valeric and his undead knights patrol the borders of the kingdom and in the keep the risen corpses of the aristocracy vie for position in a twisted parody of their lives. Although life has left the Kingdom of Veil’s End, the halls of that barren city are alive with activity of the dead. 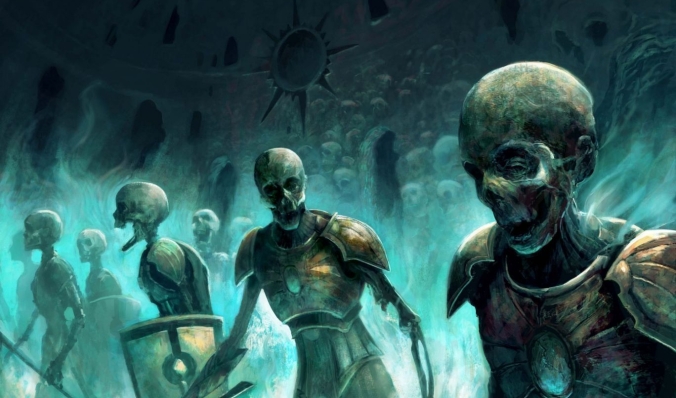